THE LOST TREASURE OF 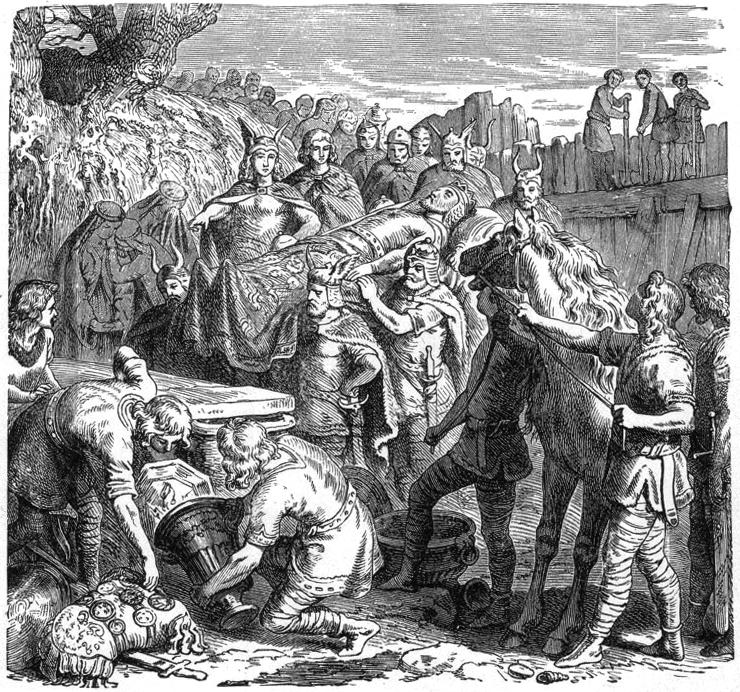 Picture: The burial of Alaric in the bed of the Busentinus woodcut by Heinrich Leutemann (1824-1904).Illustration from Ridpath's Universal History, Section XII, p. 342

On 24 August 410 AD a Visigothic army, led by King Alaric I, entered Rome through its Salarian Gate. This was the first time in almost 800 years that the walls of the Eternal City had been breached and in the ensuing sack, which lasted three days, the Goths plundered for themselves all the treasures that had been looted by Rome's armies down the centuries. The loot is said to have included 2 tons of gold, 13 tons of silver, 4,000 silk tunics, 3,000 pounds of pepper and the menorah - the huge seven-branched, golden lamp-stand stolen from the Jewish Temple in Jerusalem in 70AD. Alaric's sack of Rome marked the beginning of the end for Rome's empire in the west but, before the year was out, the victorious Gothic king was dead.

After his success, Alaric and his army had marched south, intending to establish an independent kingdom in Sicily or North Africa, but whilst waiting for a fleet to be built to take him and his men across the Straits of Messina, Alaric died. Though the cause of his death is unknown, the extraordinary manner of his burial was recorded in The Origin and Deeds of the Goths by the 6th Century Romano-Gothic historian Jordanes:

“...His people mourned for him with the utmost affection. Then turning from its course the river Busentus [Busento] near the city of Consentia [modern Cosenza] - for this stream flows with its wholesome waters from the foot of a mountain near that city - they led a band of captives into the midst of its bed to dig out a place for his grave. In the depths of this pit they buried Alaric, together with many treasures, and then turned the waters back into their channel. And that none might ever know the place, they put to death all the diggers...”

Since that time, countless treasure seekers, including French novelist Alexander Dumas and Nazi SS head Heinrich Himmler, have searched for Alaric's lost tomb, and its hoard of looted gold, but nothing has ever been found. Will Thomas Devilstone have any better luck? Find out in The Devil's Pearl!

Read the First Chapter of The Devil's Pearl